My 10th gr-grandmother measured penises with broom handle. In the 1630s.

It’s on Wikipedia, so it must be true, right?  But this one’s been well-documented by other historians, so I tend to believe it’s not a complete fabrication.

Genealogy reveals some strange things about what constitutes fame.  When people find out it’s my hobby, they generally ask one of two questions:

I’ll save the second question for a later post.  Let’s take a whack at #1 and explore how to tackle a couple of famous (actually infamous) ancestors.

We love the notion of a famous ancestor. It’s human nature to gravitate towards the celebrated, the heroic, the prominent and prosperous. Surely an ancestor’s fame and accomplishments gives my own life some air of importance, the next best thing to royal lineage and a title.

I’m ambivalent about famous relatives.  On the one hand, it’ feels slightly unsavory, playing off the celebrity and accomplishments of others, even if they were  direct ancestors. And if you’re going to enjoy the stature in having Revolutionary war heroes in your history, what about balancing that with the roguish behavior of others.  My 10th gr-grandmother, Grietse Reyniers, noted above, was a prostitute in 17th century New Amsterdam.  Her colorful exploits of measuring members with broom sticks in saloons continued even after she married my 10th gr-grandfather (it turns out it was his saloon). His is reputedly the first follower of Islam to come to New Amsterdam, a Dutchman with a Quran, though they both apparently attended Christian services. Famous? Not exactly, although it’s through them that I became related to Cornelius Vanderbilt and Warren G. Harding(to drop a couple of names myself). Notorious? Definitely. 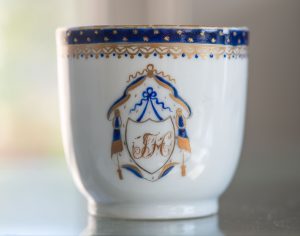 Which brings us to our next subject: John Hewlett III (1731-1812) of Woodbury, Long Island. Recently my aunt gave me several pieces of his family’s china (pictured above). They’d been sitting in storage for a half-century, and were accompanied by a short note describing how Hewlett’s cousin had brought the set back from China in the late 18th century. Here was a prominent man who had attained beautiful things, and after 250 years I’d been fortunate enough to keep them in the family for future generations.

Curious, I decided to research John Hewlett III further to learn more about the man and his family. Unlike most Long Islanders, who largely sat out the American Revolution, Hewlett, who was a large landholder and justice of the peace, swore allegiance to the King. While he didn’t actually take up arms (unlike his cousin, Richard), Hewlett did serve the British by taking charge of collecting assessments of hay to feed Loyalist horses from his fellow citizens. It was only due to his being older and not having actually picked up a gun that Hewlett escaped harsh judgment by the Congress after the war ended.

Hewlett’s loyalties may not be well-regarded on this side of the Atlantic, but his legacy is largely in the things he left behind. Multiple pieces of his Woodbury house have found their way to the American Wing of the Metropolitan Museum of Art in New York, where they are presented as prime 18th century examples of rural interpretation of high-style design. Clearly, gr-gr-gr-gr-gr-gr-grandpa John’s taste in furnishings was better than his taste in style of government.

And to the question of who I’m related to that’s famous, I can only answer: It’s complicated.