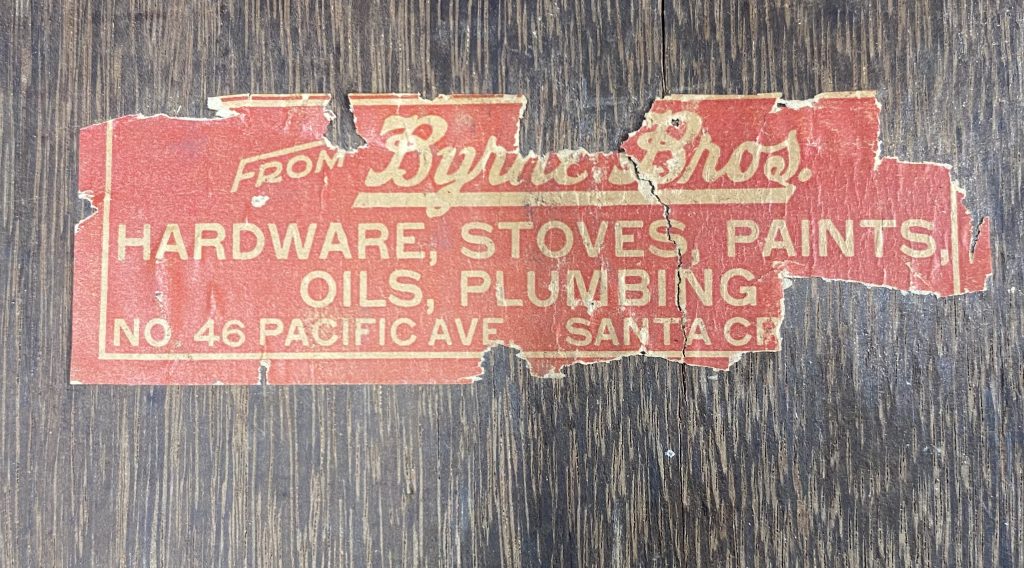 First of a three-part history of Byrne Bros Hardware in Santa Cruz, CA

An email arrived recently from an unfamiliar address, containing a photo of an old piece of wood.  But unlike 90% of my ByrneFamily.net inbox these days, this was neither spam nor a phishing project, but a delightful relic of long defunct Byrne Bros hardware.  According to the sender, a very nice man named Schuyler, this piece had been recovered from UC Berkeley, where it was once used as a testing sample to determine its material properties. How and why it was sourced from Byrne Bros is a question that likely can’t be answered, but based on the logo and address, 46 Pacific, the board is certainly post-1920 (prior to the early 1920s, the address was 16 Pacific).  I was delighted by the photo, but it also prompted me to tell a little bit about the story of Byrne Bros.

Byrne Bros hardware is a common connection between nearly all of the Santa Cruz Byrnes. Formed by Walter and George Byrne in 1895, the store and plumbing contracting business was a source of prosperity, family pride and later dissent among their descendants.

But Byrne Bros was actually an outgrowth of a hardware business established decades prior in the 1860s, one that was built in part by an earlier generation of Byrnes.

I’ve spent some time documenting the history of Byrne Bros hardware. In this first installment, we’ll look at how it all got started – long before George or Walter Byrne ever set foot in Santa Cruz. 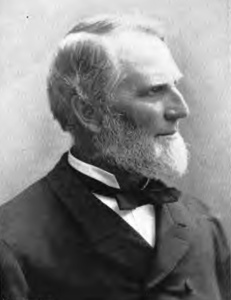 Hardware in Santa Cruz during the late 19th century was dominated by Lucien Heath (1819 – 1888) and sons.  Born in Lake Oswego, NY, Heath migrated west to the Oregon Territory in 1852, where he settled as a farmer.  Heath was active in politics, and when Oregon was granted statehood in 1859, Heath became its first Secretary of State.

In 1866, then in his late 40s, Heath left Oregon for California, moving south from the Willamette Valley to Santa Cruz. In December of that year, he went into the hardware business, joining in partnership with William Anthony at the corner of Mission and Water streets.  Anthony, who was also the assistant county assessor, had been in the stove and tin business since 1864.  A rival hardware company, SC Haydon, was also nearby on the corner of Locust and Pacific.  Less than six months later, Anthony had retired and Haydon was gone, leaving Lucien Heath as the primary hardware purveyor in Santa Cruz.  In 1871, Heath moved operations to the northwest corner of Locust and Pacific, and brought his son, Charles, into the business.

The first Byrne to set foot in a Santa Cruz hardware store was Charles Benjamin Byrne. Born in Jackson, Michigan in 1842, Charles was the youngest of seven children of George Byrne and Sarah Griffing. Trained as a plumber and a tinsmith, Charles registered for the draft during the Civil War, and like most of his brothers (the only Byrne to enlist being Rufus Byrne), he did not participate.

By early 1870, Charles had married Josephine Robinson of Johnstown, MI. The young couple moved west from Jackson towards Lake Michigan, settling in Paw Paw Village, where Charles made his living as a tinsmith.  Nine months later, their only child, Marion Josephine, was born. At some point in the next few years, Josephine died, and daughter Marion was sent to live with Josephine’s mother, Susan Robinson, herself a widow, living in Battle Creek, MI.

Following Josephine’s death, Charles left Michigan and headed west for California, initially landing in Ventura, CA, where he appears in the Great Register in Ventura in 1875, and then north to San Francisco.  By August, 1877, Charles arrived in Santa Cruz.  His first mention in the local papers is in May, 1878, as an actor, playing the part of the villain, Simon Legree, in a local production of Uncle Tom’s Cabin.  He initially lived at 101 Locust Street, a boarder in the home of attorney A.E. Bolton.

Once in Santa Cruz, Charles quickly found his way into the hardware/tinsmith trade, initially working as an employee for Lucien Heath’s growing hardware venture. By September, 1878 he was a full partner, and the business was renamed to Heath & Byrne. Santa Cruz was growing rapidly, growing by over 50% in the 1880s, and the business prospered, with daily advertisements of stoves, tin work and hardware in the Santa Cruz newspapers of the day.

Another Santa Cruz Branch of the Byrne Tree

In 1881, Charles married Florence Washburn, daughter of another early pioneer Santa Cruz family.  The couple went on to have two children, Helen (b 1883) and Don (b 1885).  Helen married Roy Cornell (1881-1957), a  mining engineer, and the couple settled in Los Angeles. They never had children, and Helen died in Los Angeles in 1972, aged 89.  Don became a dentist. His life was cut short during the influenza epidemic in 1920, succumbing at age 34 in Los Banos, CA, where he had just opened a practice. Prior to moving to Los Banos, Don’s practice in Santa Cruz was on the 2nd floor of the Drennan Building on Pacific, home of Byrne Bros hardware.

Charles Byrne’s daughter from his first marriage, Marion, grew up with limited contact with her father.  In 1893, at age 22, she married Charles Russell in Jackson, MI. They later settled in Plainfield, NJ.  She did stay in touch with the family, and granddaughter, Amelia Byrne Williams, recounted getting Christmas cards from her cousins Sue and Jo (daughters of George Griffing Byrne).

As the 1880s progressed, Lucien Heath’s son, Charles Heath, took over his father’s role in the business.  Lucien, meanwhile, went into the real estate business with another early resident of Santa Cruz, Samuel Drennan.  Drennan’s daughter, Mabel, would one day marry Charles Byrne’s nephew, Walter. Property owned by Drennan in downtown Santa Cruz would one day help and later complicate the evolution of Byrne Bros.

Setting the Stage for the Byrne Brothers

Outside of the hardware business, Charles Byrne was also prominent in the social life of the community.  He enjoyed acting, playing leading parts in local stage productions, and was a member of the local dramatic company.

By the time Charles Byrne exited the hardware merchant business in 1891, his 13 years in partnership with the Heath family made him the longest running and most prominent member of the business. He also laid the groundwork for his nephews, Walter C and George G Byrne, who would take over the business in just a few years.

As he moved on from hardware, Charles dabbled in politics.  A Democrat, he mostly lost, notably in a run for the CA Assembly in 1890, and later for City Treasurer in 1894.  His only success was as a school board trustee, and he was well-regarded in this role.  He remained professionally active, and became a capable city superintendent of waterworks under several administrations.

Charles died from a heart attack in 1912 at age 69.  His legacy in laying the groundwork for Byrne Bros hardware received only a minor mention in later years, but was essential in providing reputation and connections for his nephews Walter and George.  Their story will be told in Part II.